Dinosaurs: Great for Movies, Not for Software

Why monolithic architecture faces extinction and the lean, micro-service model that will replace it

While the Jurassic Park blockbusters live on, dinosaurs, do not. There are a handful of theories explaining their extinction: An asteroid. Climate change. The exorbitant amount of resources needed to sustain their giant bodies. Some even say that their brains were too small for their big bodies. Despite the mystery, a changing environment and their generally huge scale are frequently part of the debate.

One direct descendant of the dinosaur was able to survive. Yep, you got it, the bird. Interesting that a micro-version of the dinosaur, one that is compact, light, efficient, and adaptable is what remains. Is this foreshadowing for what’s to come with technology? Are we at the end of the technological Cretaceous period (a Techtaceous period, if you will)? I think so.

Big, all-inclusive dinosaur technology is dying out and being replaced with smaller and more agile setups. It is a move from monolithic software to microservices, and Amazon, Google, Netflix and Uber are among the companies that have made the transition. They are doing this for good reason; monolithic architecture is difficult to sustain.

Monolithic architecture refers to the traditional approach of building software as a whole - one, interdependent and often large component (CMSWire). If you need to scale up, you must duplicate the whole system with more machines. Adding new features or functionality can impact the entire system because deployment must be done as a whole.

Contrast that with a microservices architecture, where an application is developed with many small services that can be independently built, tested, deployed and maintained. These services can even be built in different programming languages. This structure allows developers to “segment and isolate sections of a software, resulting in, ‘little software components [that] talk to each other via APIs, [which can be] scaled independently,’” says [John] Rector, [Co-found of DialPad].

Applying these concepts, on a very basic level, to the setup of hotel software, there is one clear monolithic system that is reaching the end of its productive life. It’s the legacy property management systems (PMS). These unwieldy dinosaurs require too many resources, and they have become inefficient and ineffective at this scale. Traditional PMS providers have tried to do it all, growing beastly software that attempts to cover everything. But, in doing this, most of these systems have features that are half-baked, old and clunky. And don’t even get me started with deploying new features – this can take eons. 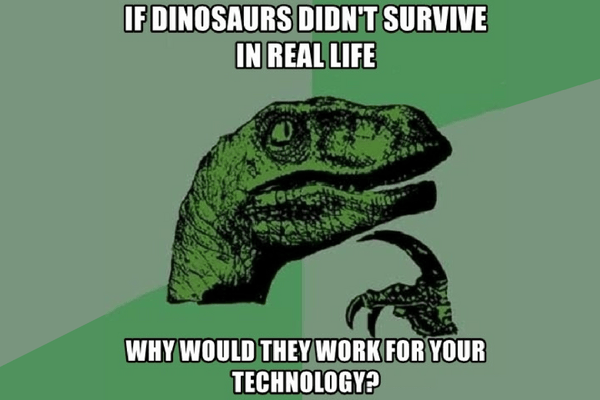 *Made with the help of memegenerator.com

New solutions function more like the microservices model, building a sturdy and savvy core PMS that uses public, open, two-way APIs to connect to the apps and services that a hotel or chain needs. Think of it as the compact descendants of the dinosaurs—the birds of technology.

The Benefits of the bird

Adopting this new, more agile setup requires a mindset change for many hotels.  The PMS has its core features (reservations, inventory, rates, accounting, payment) without all the bells and whistles. Hotels then have the freedom to choose the bells and whistles by selecting from pre-built apps that are already connected via an API. Just click to connect. Innovative (or picky) hotels can even build their own apps. Best of all, hotels get to choose which added functionality they need and which ones they like (i.e., two apps may do the same fundamental thing, but based on user interface or functionality, one might be preferable to another).

Hotels that rethink their software with this approach will find many benefits, including:

Freed up development efforts - Developers don’t need to waste time working on problems that have already been solved.

Speedy deployment - Microservices, according to ButterCMS CEO Jake Lumetta, “allow for fast, independent delivery of individual parts within a larger integrated system.” And they are easier to “recompose and reconfigure.”

Less risk - If there are problems with a microservice, it doesn’t affect the entire system, only the application with the problem. For hotels, this means problems are easily fixed without affecting the core PMS.

A better product - Perhaps the biggest gain for hoteliers is that their technology stack becomes stronger and more tailored for their business – they can pick the best, newest and most powerful applications that all work together.

Adopting a micro-services model means that hotels have the central system (the PMS) and then either develop their own applications or use an application already developed on the open API. Either way, hotels only use what they need. Some hotels need food and beverage applications, revenue management, upsell, reputation management, CRM, distribution, housekeeping and maintenance, sales and catering, and spa management and some only need one or two of these. Hotels are paying dinosaur fees for a whole lot of services they won’t ever use. But with microservices, they pick what they need. And it works better.

As things –be they dinosaurs or technology - grow, they get harder to manage. They require more maintenance, they have more dependencies, and they require more and more resources until they can no longer be sustained. Then they become extinct. By “building an application consisting of many small services that can be independently deployed and maintained, don’t have any dependencies but rather communicate with each other through lightweight mechanisms and lack a centralized infrastructure,” the whole system works better (Elastic.io). Microservices are the future of a more streamlined technological future. So, let the dinosaurs stay in the past and in the movies. It is time to embrace their descendants – the little birds with the big benefits that hotels need.